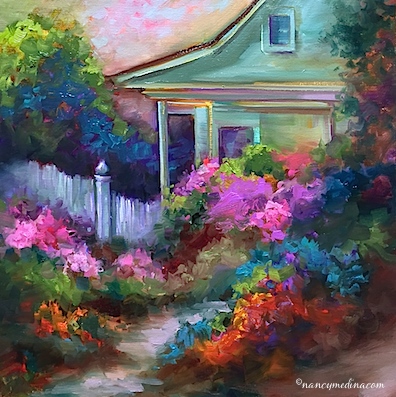 Pink Azalea Cottage is a scene that might seem familiar to anyone who has grown up in East Texas and seen the azaleas in full bloom. The cottage is a memory of my great-grandmother's home in Palestine, Texas, where she raised a family and had a garden and did all the cooking and housekeeping even though she was blind. Nanny used to be able to tell which plants were which by smell, touch and taste. My mother spent every summer of her childhood with her grandmother. Mom said she would take the train down from St. Louis to Palestine after school let out for the year, and the summers she spent in Palestine were the happiest times for her growing up.

If you walk down the path and open the back porch screen door, you'll enter Nanny's big kitchen, with the formica table. Beyond the kitchen, through a large arched doorway, you will find her formal living room, with a collection of plates from around the world along the walls, and her favorite rocker next to the radio just under the windows by the cuckoo clock. This is where Nanny spent every afternoon listening to her favorite gospel show. I imagine there were many, many days my mother was in her lap, being rocked to sleep, with the sound of birds outside the open screen windows, the clock chiming the hour and half hour, and the sound of the voice on the radio. What a dream come true it would be to be able to travel back in time and see this tableau, and my mother's golden curls, as she lay sleeping in her grandmother's arms.
Posted by Unknown at Tuesday, February 24, 2015

Email ThisBlogThis!Share to TwitterShare to FacebookShare to Pinterest
Labels: classes and workshops, cottage