Sign Up for My Art Newsletter!
.
.
Lava Red Poppies was one of three poppy paintings completed in Flower Mound Studio today. I confess we had to make certain sacrifices in order to dedicate such an amount of time to the easel. One sacrifice was failure to throw Studio Director AnnieBee's toy du jour as frequently as her majesty would have preferred. With many apologies and promises to do better tomorrow, I'm hopeful her humble servant will be forgiven shortly. Right after bed-time snack dispensations, I imagine... 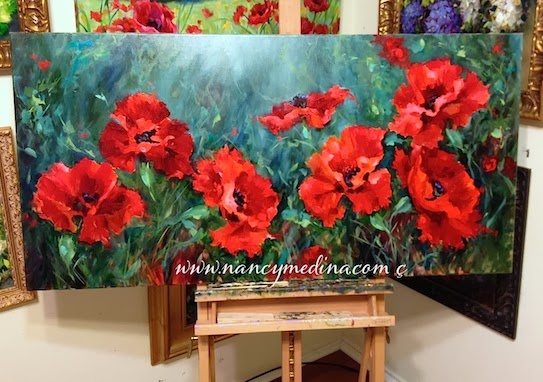 A big ole poppy painting on the easel!
Posted by Unknown at Wednesday, November 20, 2013

Email ThisBlogThis!Share to TwitterShare to FacebookShare to Pinterest
Labels: classes and workshops, poppies

Me and momma love your poppy paintings
Lily