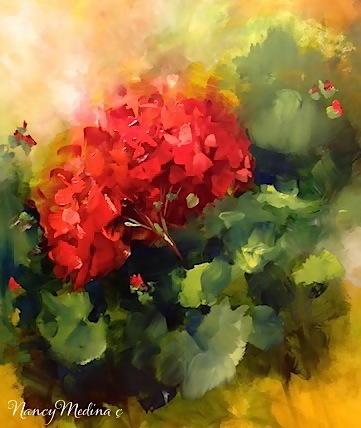 Garden Glow Geraniums was one of my seven class demonstrations in St. Louis last week. I had the great good fortune to be the guest of an accomplished portrait artist, Sharon, in her amazing home built by a steamboat captain in the 1830s. This wonderful home with its hardwood floors, old brick walls and archways, and fireplaces was filled with antiques and artwork, the kind of place you could easily picture in a great mystery novel. Windswept is the name of this home, Sharon told me, after filling me in on the activities of the resident ghost, who makes her presence known "only every three or four months". More than one night I awoke with my heart pounding when I thought I had heard a floor creak in the guest bedroom. I had the whole upstairs to myself, so surely this was a ghost making all that noise, anyway that's how my mind would run at midnight in the dark in this almost 200-year-old house. Sharon said she thinks of her ghostly roommate as a "she" since most of her activities have occurred in the kitchen or original living room downstairs. Pictures have been taken down, a cutting board dropped with the support pegs removed, and the magnet photos of Sharon's children were found one morning, all face down, arranged on the floor in front of the refrigerator.

As beautiful as the home is, its residents were even more delightful. Along with Sharon, who made me eggs every morning and treated me like royalty, there were her two little pups named Sassy and Max, four kitties who lived outdoors, a one-eyed squirrel who came every morning (and some evenings) and sat with the cats on the porch waiting on his snacks, and Nina, a double yellow head Amazon parrot. Nina's singing, door squeaks, and one sided telephone conversations kept me giggling all weekend. She had Sharon's accent down pat. By the end of Day One, I was madly in love with this golden feathered girl. What's not to like about a colorful friend who exclaims "Hello Beautiful!" to you every morning? Finally, I leave you with a video of the fireflies in the one-acre wood behind Windswept. I videotaped them just after sunset. Turn up the volume and enlarge the video, who knows...maybe you'll spot a ghost! 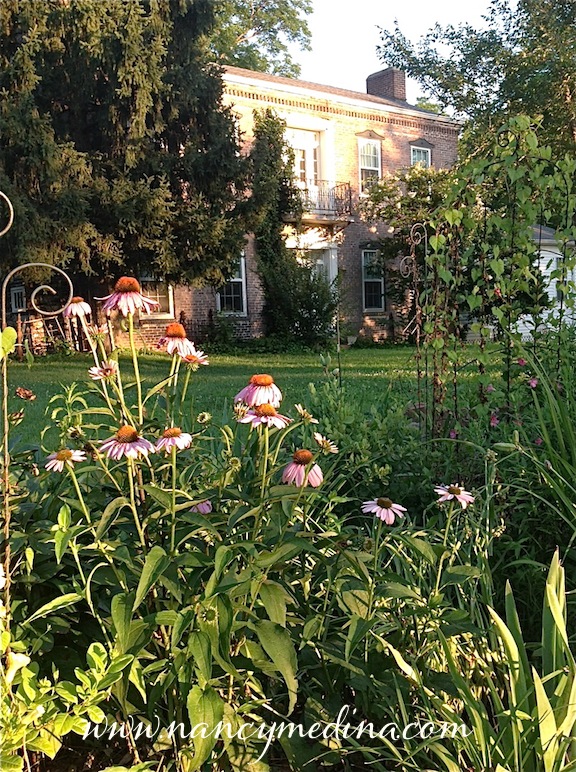 Turn up the volume and enjoy the show!
Posted by Unknown at Wednesday, July 17, 2013

What a gorgeous home and I sure love the name of the place. The geranium is also gorgeous!

Beautiful! Geraniums are my favorite flower ...