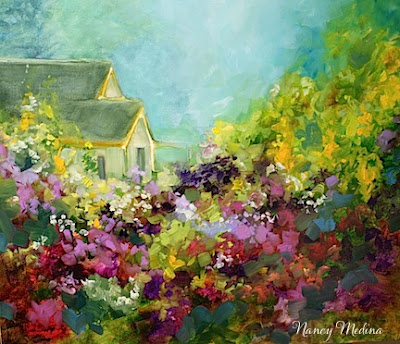 New England Wilds is the newest painting here on the easel in Flower Mound Studio. I drove by The Flower Mound tonight on my way home from the grocery store. The Mound's flowers were dried and brown from our recent freeze, but still looked beautiful and rose up much higher than I could see. Flower Mound was founded in 1844 by settlers who survived the Great Depression and other hardships, even though the railroads and other major developments passed them by.

The Mound is believed by some to be an Indian burial mound, but historians say there is no proof that is true. The settlers told the story that every time someone would build on it, a storm would blow away the building materials. The Mound stands untouched to this day, even though Flower Mound has grown up around it to a town of over 50,000. The Mound is now gated with a historical marker, and it stands alone as it has for decades, an enigma, silently watching over us.
Posted by Unknown at Friday, December 21, 2012

A wonderful story of your town's history. Not too long ago, we visited Cahokia Mounds here in Illinois. So wonderful to learn of new things. I love this gorgeous cottage surrounded by flowers. Every morning would be beautiful, every night redolent with flowery air!

Thanks for the story of Flower Mound and your painting is lovely. Merry Christmas and God's blessings in the new year! Egretta