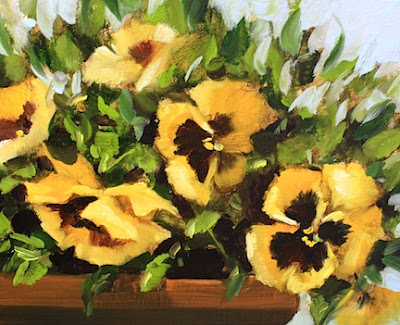 Yellow Pansy Groupies is a new work on the easel, after an exciting day in North Texas. They're estimating over a dozen tornadoes touched down in and around Dallas today, and thankfully so far there have not been any reports of any deaths. Lots of homes and fences and trees were damaged, and the scariest image was of the shafts of a picket fence of one house embedded in the front entryway wall of another house, like spears thrown by some giant fictional TV creation in a cartoon.

At my office today we were evacuated to the inner hallway of our building, away from the glass windows (Dallas does love its glass window buildings) and my husband and his coworkers were evacuated to a vault in his building, which used to be a bank. A tornado touched down on his parking lot at work only briefly, without damaging anything, thank goodness. We were worried about the puggies, of course, so we kept a close eye on the pug cam all day. The pugs stayed indoors and it was terribly dark, like night, but judging from the presents they left us, they didn't feel it was safe to venture out on the porch today. Even the hubby said he didn't blame them! Wherever you are, I hope you were safe and sound and far away from the storms.
Posted by Unknown at Tuesday, April 03, 2012

Dear Auntie Nancy
The yellow pansies are so very beauitful!
We were thinking of you all today as we saw on tv that very scary tornados. We are happy that everyone is okay-
we keep you all in our hearts
love
tweedles

So glad you are all safe, Nancy, including the Puglets. The pansies sure are a bright spot of sunshine after your horrific day of weather. I am glad to hear no deaths have been reported. My heart goes out to those who lost homes or had extensive damage due to the tornadoes. How scary!