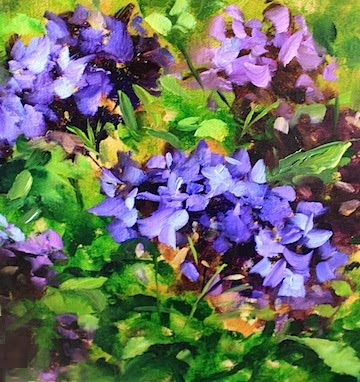 Blue Jungle is a new painting in Flower Mound Studio, the end of a birthday weekend. If someone had told me when I was 18 that I would be a serious artist (at least my intentions are serious!) by the time I turned 50, I probably would not have been a bit surprised. I was pretty sure I wanted to be an artist even at that early age, but my parents talked me out of it. They told me if I were an artist I would starve, and I really think they believed they were doing me favor by telling me this. So I took their advice and chose another career. I became a journalist. (Journalists out there, I hear you laughing...)

Though now my journalism career has turned into something more lucrative, there was a decade of newspaper jobs that barely paid the bills, and small town newspapers where I would come to work and have to sweep the mouse droppings off the top of my desk before starting my stories for the day. I lived on bologna and cheese with mustard on white bread for 12 months at one paper and could not afford to turn on the air conditioning, even when it was 100 degrees outside. But the good news is I had illustrious titles to share with friends and family. Editor, managing editor, executive editor, it all sounded so very important.

The best news of all, is my career does give me the time I need to have two full time jobs, and the second one, being an artist, makes it all worthwhile. Someday that will be the only hat I wear, but for now, the day job sure helps pay for the art supplies!
Posted by Unknown at Sunday, February 12, 2012

Lovely story Nancy, and beautiful painting as always. I guess behind every successful artist is a one-time starving something or other.........LOL...... I am sure all your 'fans' are pleased you continued with art. Hugs to the pugs from a very hot Queensland.

Happy 50th, my dear friend Nancy. I hope you had a most fabulous weekend and you turned out more of my beautiful hydrangeas!

I love looking at your wonderful paintings and I love reading what you write too--you are like one of my best friends! lov, char
and I am so glad you are having a good birthday week May you have a good birthday year!!!!

Thank you Linda - I hope you have air conditioning running there in Queensland! We had icy sleet this morning. I would mail some to you, but I am not confident it would do you any good! :)

Crimson thank you so much! It has been a hydrangea kind of month already... : )

Hi Char- fellow artist and facebook pal! I know some day we are going to finally meet at some grand art event. thanks for the birthday wishes and hugs to you!!

hi nancy!
oh your blue hydrangeas are simply magical just like you!

Happy Birthday Nancy!
My moms and me love your paintings and so we are always happy that - you have a magic paintbrush,, to paint smiles for us.
Happy Valentines Day
love
tweedles

ps mama said tonight, oh if only i could paint like Nancy~
xoxo

Hi Nancy, I have just discovered your blog. Your paintings are just beautiful!!
I was fascinated to see that you are able to both write and paint to your fullest ability. Very encouraging to see as I am trying to reach my full potential(and find out what that full potential is!) in both disciplines and wondered if it would be possible. you are living proof that it is.
Happy painting and writing!
Wendy