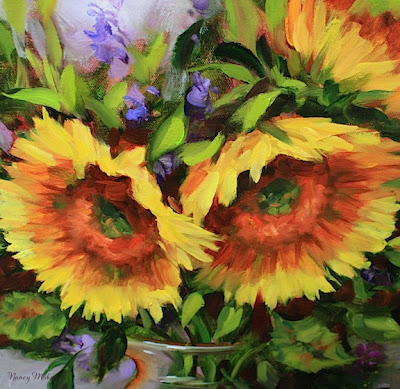 Brush Fire Sunflowers by Nancy Medina
14X14
Oil on Gallery Wrap Canvas
Purchase Information
Nancy Medina Web Site
Brushfire Sunflowers is a small study for a four foot sunflower commission under way in the studio today. When we were young and growing up on the farm, every weekend there was a potential adventure when the "city folk" came to visit their various properties around the area. Every once in a great while someone would fail to properly put out a fire and the smell of burning oak would fill the air. My parents would grab brooms, blankets, and buckets of water and run toward the smoke. The volunteer fire department would show up with their old tanker truck and the flames would be put out, thanks to a lot of very determined farmers.
That was back when most of the property in rural Kaufman County, Texas was undeveloped. I wish I had been smart enough to catalog the wildlife back then, especially the birds. At that time I was more focused on insects, since I had decided with utmost certainty I was going to be an entomologist. My grandmother bought me the illustrated "Bug Encyclopedia" and I still have it here in the studio today, with my rather rounded script signature on the inside cover written in number two pencil. It all seems like a million years ago now, although I do paint an occasional bug into my flower gardens.
Posted by Unknown at Monday, November 21, 2011

This is beautiful, Nancy. It also goes mighty prettily with your memories of growing up. And I can't believe you wanted to be an entomologist! I still have a fear of bugs!