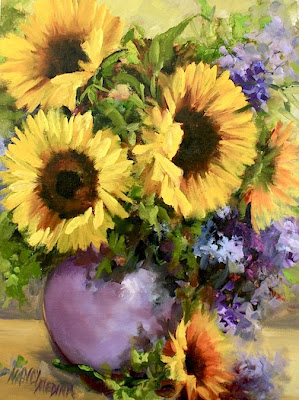 My Daily Painters Gallery
Nancy Medina Web Site
Thunder Blossom Sunflowers is named in honor of our unusual wintry mix in Dallas. The weather guy announced this morning we were having Thunder Sleet and Thunder Snow, right after making that joyous announcement that the roadways were iced and most of us would likely be home from work today. I had never heard of Thunder Sleet and Thunder Snow, and without Googling it to confirm, I'm going to hazard a guess he made that up. The wind chill tonight is 10 degrees below zero, and four inches of white sleet is blanketing a solid layer of ice on the ground. It's enough to make me want to lay on the floor in front of the footheater all day long. Oh wait, that's Howie's job!

All this chilly stuff was quite a change from Scottsdale, Arizona, where I spent the weekend for a business meeting. Thank you dear Trudy for checking on me, to see if I was still kicking, since I had not blogged in a few days. Rest assured strict instructions had been left for Howie to take over in my absence, but his demanding nap schedule took precedence. Howard definitely has his priorities straight, even if he is just a little pug.

Here is a peek at the almost finished stage of my new container garden, Santa Ana Sunflowers. This large one is very bright, and very vivid. I had so much blue and purple foliage in the background, I felt compelled to add my favorite to the center - sunflowers! I promise I fought the urge as long as I could. But since yellowy orange is the opposite on the color wheel thingy ma bob than purpley blue, my hands were tied. I promise to share the final with you very soon, or, as soon as I can get it outdoors in this frigid weather long enough to snap a good photo for you! 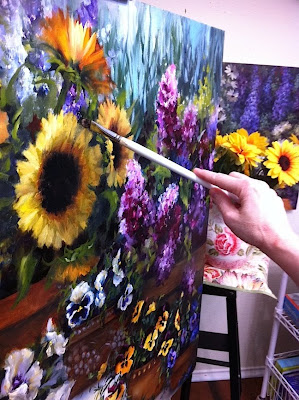 What a gorgeous bouquet of complements, Nancy! I am of the same mind as Howie. It is kismet. I think Howie and I could snuggle til the cows come home. Be advised that we are experiencing that same weather up here in Illinois. Ah well...I needed a day off of work midweek. I'm going to enjoy it too!

Thank you Laura and Tim!

Sherry, I hope you are staying warm, I think Howie and I are ready for warm weather again - something I thought I would never say. : )

Thank you Joan, you too!

Spectacular sunflowers!
Its a long way off until spring.. but we can dream - right?
We have been thinking about you,,, hoping you all are safe and warm
love
tweedles