Tulip Tango and a Tour of Artscape at the Dallas Arboretum 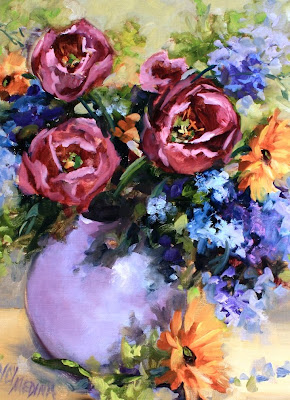 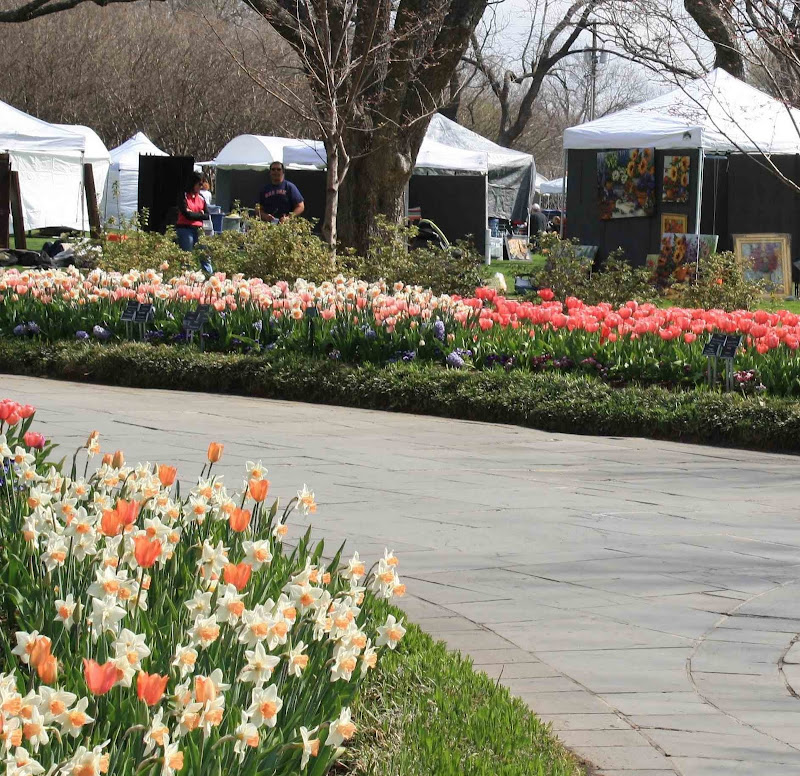 Last weekend the Dallas Arboretum hosted Artscape, and 94 enthusiastic artists showed up! See that good looking guy in the picture? Guess whose hubby he is...... He gets brownie points for coming out to the Arboretum on Sunday and taking the whole tent and everything down by himself in the snow! 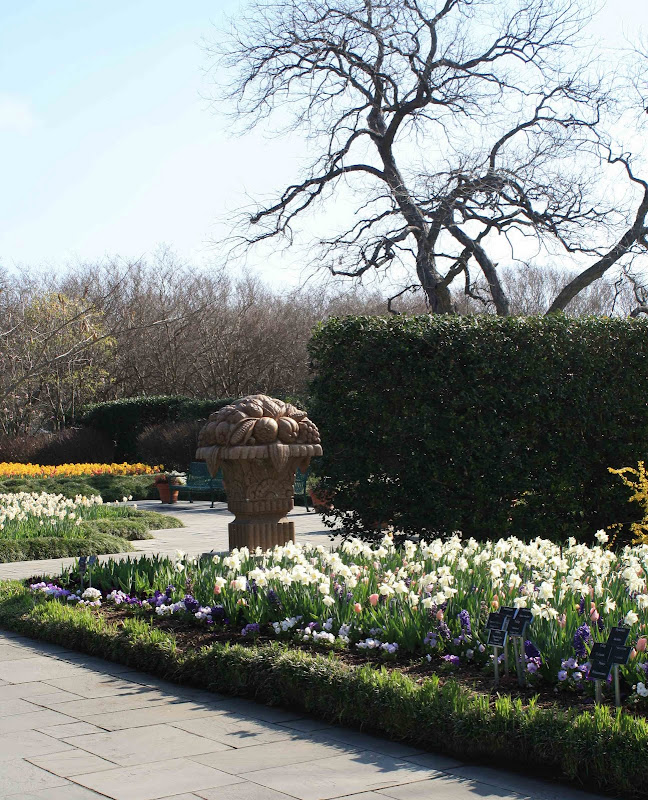 Friday during art show set-up the weather was excruciatingly beautiful. The park was crowded with families and friends visiting from all over the country. I met folks from South Carolina, Georgia, Vancouver, and Kaufman, Texas. (I grew up in Kaufman, that's like a whole 'nother country. I can still remember when the first stop light was put in!) 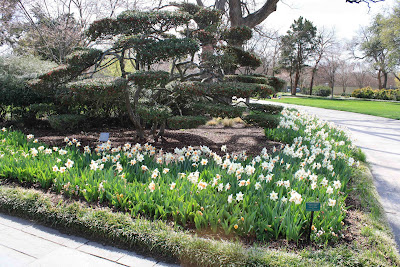 The bulbs were in full bloom, and many tulips were just starting to open this weekend. 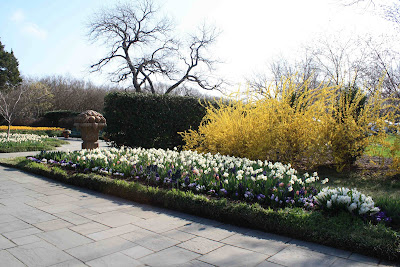 The artboretum's flowering trees are at their best in March and April. This backdrop was right behind my tent! Can you imagine having an art show in such a lavish setting? 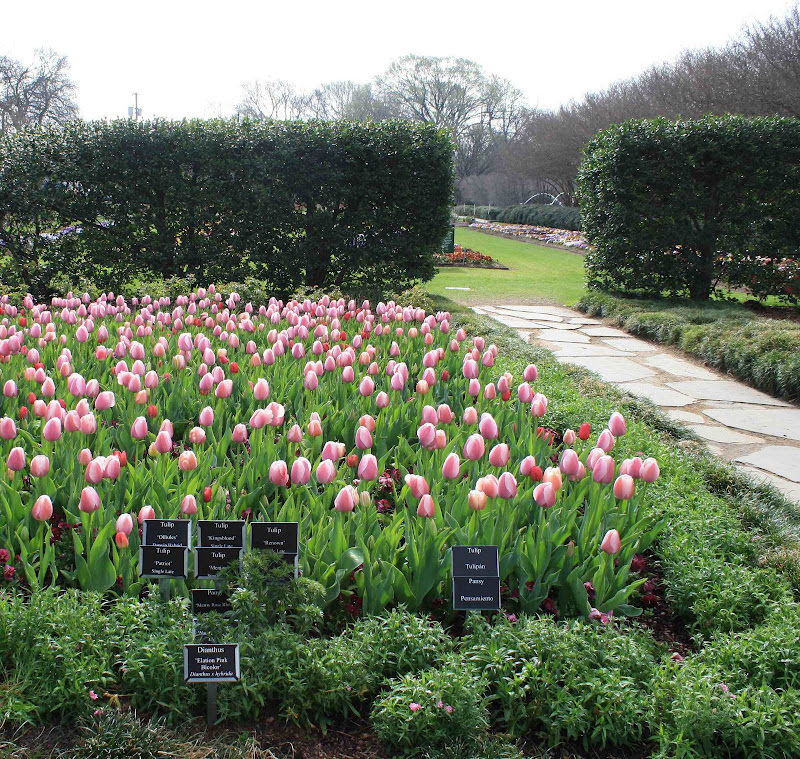 The tulips were the real show stealers this week, and so many are just beginning to bloom. I'd like to go back in a week or two with my camera to see what else has arrived. I'm hoping the Queen of the Night black tulips make another appearance this year. They were breathtaking last spring. 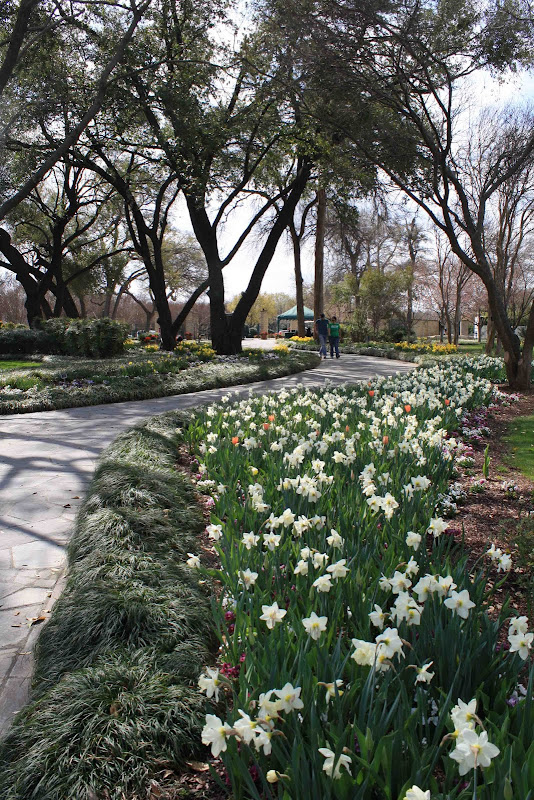 Are these daffodils? I know as a flower painter, I need to study horticulture once in a while. These beauties come in a real variety of colors, and they were everywhere this weekend. 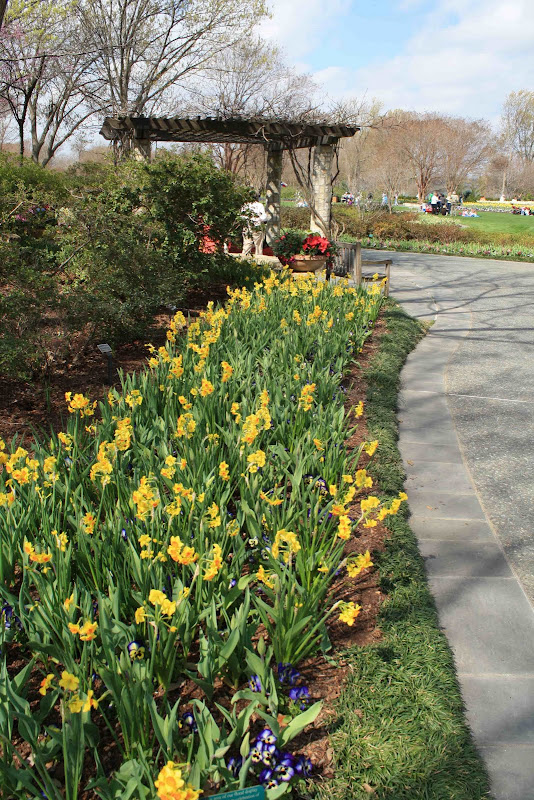 See what I mean? Here they are again in yellow! There is a real artist at work in this park, every bed had a carefully constructed color theme with complimentary flowers placed together. I wonder who the architect of this feast of color is? If you know, please share!

I'll share more pictures from the show over the next few weeks. Thanks for joining me on a tour of Artscape and thanks to everyone who came out on Saturday in frigid temperatures to buy art! What a great show, even if it was cut short by snow on Sunday!
Posted by Unknown at Tuesday, March 23, 2010

Another beautiful painting, Nancy. I cannot help but think how beautiful my beloved lilacs would look housed within...a perfect Easter palette. The grounds of the arboretum are definitely a work of art in and of themselves. I am struck by how odd it looks to have such luscious spring blooms against the backdrop of trees still in their stark winter dress (i.e., no leaves, no buds). I don't know the names of too many flowers, but those are indeed daffodils. So pretty, yes?

Thank you Sherry! You are so fortunate to be able to grow lilacs, I wish they would grow in Texas!
many hugs

A lovely painting and a lovely tent full of flower paintings. Thank you for sharing those wonderful pictures of flowering bulbs at the arboretum. I hope you had a successful time, Nancy!

nancy,
the picture is great...
congrats...
Dallas Arboretum is the ideal place for artists like you...

Looks like a gorgeous and inspiring place to share your work. Sorry Mother Nature had other ideas!

Thank you Marie - I had a great show, and it's always a treat to go to the Arboretum. Even in the winter it's full of so many beautiful plants.

Jyothisethu, thank you for visiting my blog and for the kind words!

Pat mother nature was good to us the last 2 years, I think she decided we needed a reminder this year of who was really running the show! : )