A Better Day - Geraniums and Petunias 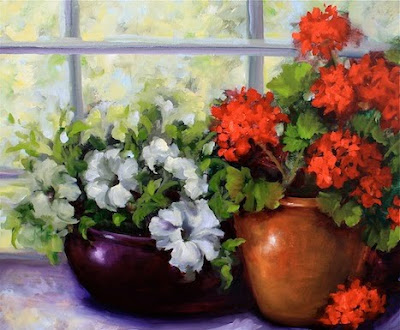 A Better Day - Geraniums and Petunias
SOLD
16X20
Oil on Linen Board
Daily Painters Gallery
nancy@nancymedina.com
It's been hard watching the news lately, and knowing how much people in Haiti are suffering after the massive earthquakes there. I've always believed in the power of prayer, and I hope there will be a better day ahead for those poor people who are going through so much. My last editor in chief, Dr. Larry Dossey, wrote many books about the power of prayer. (It was a bit frightening to learn from Larry that there are actually people in the world who pray for bad things to happen to others.)

One of our authors for the medical journal conducted a study that showed statistically that a group of post-surgical patients in a hospital in Kansas who had been prayed for had better outcomes than patients who were not prayed for. Whatever your beliefs, it's hard to ignore the fact that those who think positive, and hope for the best, are happier. Maybe it's an energy thing, maybe it's what some think of as Karma. But I will continue to wish for the best, and pray for those suffering, mostly because I have to believe it will help. Life is much too short to focus on the alternative.
Posted by Unknown at Thursday, January 14, 2010

your text within the post is as lovely as your art...
and i agree with what you wrote :)

in the art, i love the look of the mirror/reflection of the flowers on the vases.

in my prose at adivashammer.com i played a bit with water reflection.

a bit of fantasy...not as beautiful as your painting!

Hi Nancy
Your beautiful Geraniums and Petunias are the sunny part of these sad days.
We will be with you and keep all those people and their animals in our hearts too.
This has been so sad.
love
tweedles

What a beautiful painting. Petunias are one of my favorites too. It's lovely.

Prayer is very powerful. I know I'll be praying for the people of Haiti.

I couldn't agree more with your post! I am also praying for all who are suffering in this terrible tragedy.

On a lighter note.... your painting has brightened my morning!!

I love the thoughts behind this painting, Nancy. A bit of beauty too...I also believe in the power of prayer and cannot believe God answers prayers in which bad things are prayed for. Goes against who He is on a fundamental level. That said, I too hope and pray that those in Haiti can receive the help that they need.

You brings Romantica to our life.
Beautiful!!!

Thank you Missy Muse, your blog is a treat for the mind and the eyes! xoxox
Tweedley you have the biggest heart for a little ole puggy wug!
Thank you Cindy, your images are so inspirational.
Manon, I love your blog post with the fun shoes, I could hang out there all day! : )
Autumn I completely agree with you! We are like peas in a pod on that issue. : )
Thank you Irit my friend! sending many hugs to you in the land of sunshine! xoxox