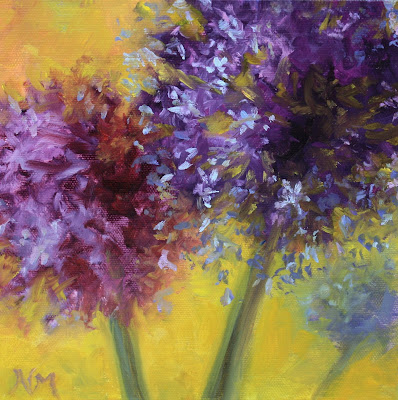 Agapanthus Trio
10X10
Oil on Gallery Wrap Canvas
Nancy Medina Art
SOLD
It may be 100 degrees in Dallas today, but we did have a nice, wet spring, and I've noticed some of our neighbors have successfully blossoming agapanthus in their beds. Carlos and I like to take long walks to the duck pond early in the morning on weekends, and no one's yard is exempt from our scrutiny.
Sunday we were taking our usual stroll when we spotted our friends who have an elderly pug named Jenny so we stopped to give Jenny a pat. They were talking with another neighbor who looked pretty distraught - when we saw why, it was easy to understand. Her roof was entirely charred. Fireworks had landed on her house the night before and her home was ruined. She said the smoke billowed three feet up from the floor so quickly, she could not find her shy kitty, and she was very worried because her kitty had run outside and had not been found yet.

She was exhausted and all of her clothes and furniture downstairs were unusable. She had been taken to the hospital the night before for smoke inhalation. I thought about her when we got home that same evening, and the kids across the street started shooting off fireworks again. Like most cities, it is illegal to shoot fireworks in Flower Mound's city limits. I had visions of fireworks landing on our roof and could hardly sleep that night. I sure hope her kitty found its way home.
Posted by Unknown at Thursday, July 09, 2009

Very beautiful, Nancy. You really capture the delicate quality of the tiny flowers on the agapanthus.

Gorgeous painting Nancy!
What a terrible story about your neighbors house. I just can't imagine the devastation she feels.

The painting is beautiful. I see remnants of fireworks on the horse trails behind my house. While it appears a safe place to shoot fireworks because there are no homes about - I worry because last years drought mixed with the floods of the past year has killed many trees along the lake and it is just dry timber and kindling.
I hope kitty is found. Is there anything we can do?

I love this color set-up Nancy...its just gorgeous...Hoping that your neighbor is doing better soon...like you I have neighbors that aim at our home every year...

Awesome agapanthus. Seemingly so much action spoken with few strokes. I like the purple and gold combo, maybe that's why they remind me of the shakers (pom-poms) we used in HS. On second glance they also resemble fireworks.
Sorry for the neighbor.

oh my gosh nancy!
what a story and painting! i hope your neighbor's kitty is found.
i am so glad they were not hurt!

Gorgeous painting!
I hope the kitty gets back home safe. I have two and I know how worried her family must be.

Beautiful flowers! Funny that I had just asked you recently what that plant was called and now you painted one. I was worried about my roof the other night too and the trees all around us. People are so careless. Hope the kitty comes back home soon, she was probably scared and is just hiding. Let's hope so!

I'm whispering a prayer for kitty. Tell them to shake the cat food box or clink the fork against her dish UNENDLINGLY throughout the next few days... she must be traumatized but hunger may bring her around... Your poor neighbor... I'd be the crank dailing 911 - those fireworks can seriously harm those kdis, too!

Great use of color and composition. I can feel the wind blowing them. Thanks for stopping by my site and for your sweet comments.

That's awful Nancy, that poor woman. I sure hope she has found her baby, and to think it's all because of some careless kids.

We are scrutinizers too. It's kind of like people watching.