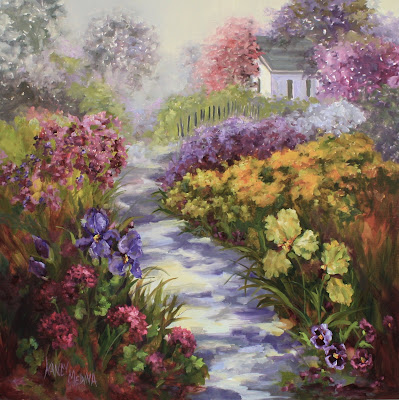 SOLD
36X36 Oil
Gallery Profile Canvas
I finished Morning Mist a few minutes ago, just as the news broke that pop icon Michael Jackson had died at the age of 50. I'm not sure I could tell you what world events were occurring at what stages of my art career, looking back, but this one will stick with me. My sisters and I had the ABC album when we were young, and I remember when I moved into my first apartment watching the debut of the Thriller production on a new creation - MTV.

Do you remember where you were when the ABC album was out or when Thriller first appeared on TV? It sure seems we lived in a more innocent time, then, doesn't it?
Posted by Unknown at Thursday, June 25, 2009

My best friend in high school LOVED Michael Jackson! I liked him, but not the way she did.

I do remember Thriller on TV. That was quite a video for its time!!!

Hi Nancy, your artwork is lovely - love the soft colours and the overall design of it - beautiful!

I would have been in high school when MJ ruled and Thriller came out, I remember it so well, what a sad ending for him - Val xox

This painting is beautiful...I now have another "favorite"...applause...

This is so serene and beautiful Nancy.

If you look very closely, you can see the little old lady tending her flowers on the side of her house...lovely!

hi nancy!
oh i just love this painting! i feel like i am walking down the path!
absolutely magical!

Hi Nancy
I wa going to say the same thing Melissa did about walking down the path. I feel like I am there.

What a shock about Michael J.
I loved his creativity and songs.
What a lonely soul.
The words of his death will stamp a date in my mind of when I heard the news.

Your painting is beyond beautiful.
It gives a feeling to the heart
love
tweedles