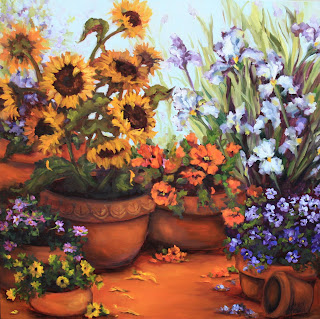 Ladybug Haven II is the fourth painting in my new container garden series. My studio is starting to feel like an outdoor garden, and it has been so fun designing these large pieces so you can place them next to one another, like chapters in a book that continue a story. There is a tiny ladybug lounging on one of the leaves in this painting, she was a little beauty I captured in a photo at the Dallas Arboretum a few weeks ago. 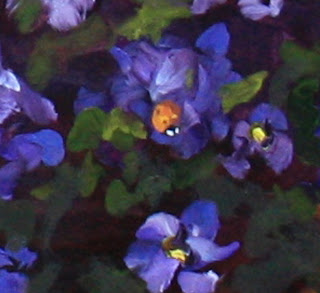 Here is a closeup of the little cutey who
lives the life of Riley in one of the
most beautiful gardens in Texas
- the Dallas Arboretum.


Speaking of beautiful gardens, I was humbled and honored to receive the Passion for Painting Award from Robin Roberts, the southern painter whose work reminds me so much of Monet with her masterful use of light and atmosphere. Every time I see one of her new paintings, I have to fight the urge to hop in the car and drive cross country so I can behold these images in person. I can only imagine how beautiful they must be in real sunlight. Don't worry Robin, I don't often burst in on folks unannounced!

I also received the Lemonade Award from my good buddy and painting pal, Judy Mackey. I don't think Judy realizes what a positive influence she is on me and our other painty lady friends, she is always encouraging us to take that next step in marketing and developing our work. Really, she doesn't nag, she just gently nudges. Judy has a gift for subtle color and if you have not seen her work, you should visit her web site and take a look. She is also represented by the Dutch Art Gallery in Dallas, where she is a showcase artist.

And - Speaking of influences, I am obligated to balance out the universe of good influences by admitting there are bad influences out there, too, namely my bad boy hisself, Howard Pee Pugpants. As his mom, I feel I must take some responsibility for his escapades, but let it be known for the record I always encourage Howie to use his powers for good, rather than evil. 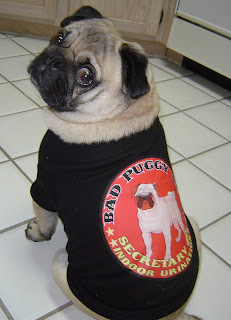 Howie's reputation precedes him, considering he has 125,000 youtube fans. If only I were so famous. As you can see in this photo, Doggy Designer to the Stars Mindy created an entire line of Bad Doggy T shirts specifically with one pug in mind who shall remain nameless but whose initials are H Pee.

Nancy - thank you for your kind words! I really appreciate and enjoy your friendship. I think Howie looks wonderful in his bad boy T - but com'on...a little mischief is a good thing - your Howie keeps us all smiling.
Happy Painting! Love the ladybug!
Judy

I don't believe a word of it, Howie. Not the part about you having fans - we all know you're famous. I don't believe for one second that there is anything bad about you!

Thos beautiful sunflowers again! Wouldn't it be great to look at that group of paintings everyday hanging on MY wall! Love the ladybug! Howie, bad?? No way, not a pug's nature!! HA HA

Beautiful painting, Nancy. It's always such a pleasure to stop in at your blog, and see joyous flowers, and pugs! I love the ladybug, too. Congrats on your award.

Beautiful warm tones in this painting! It looks so inviting too, I want to stroll in and sip some ice-cold lemonade.

How long does a painting this size typically take you to finish? Do you work on more than one painting at once?

Congrats. on your well deserved awards!

Howie is darling in his shirt! But then I've always had a thing for bad boys.

Thanks for all the kind comments ladies, and your adoration of my bad boy, well, it's expected. He attracts women like flies. ; )
Kim, if I am uninterrupted, I can finish one of these big paintings in 2 days. Usually I will spend about 12 hours on one in a few sittings. I spend just as much time staring at the canvas and trying to decide what goes next (a red flower next to a yellow one???) as I do painting. Once I have got the design set in my mind, it goes quickly. I have learned SO MUCH by working on these big formats.

your paintings always take my breath away!

i am going to try to get to coronado island just to see your paintings in person in may when i go to san diego.

i wish i was going to be there when you are!

That's such a cute photo! Your little pug's guilty eyes say "she's making it up! Do you think I'd do such things?"

Nancy, Thanks for the nice comments on my blog. Your florals are fantastic, I especially like the cropped closeups, great colors... and of course, your pugs are very cute.

Thanks for the visit to hill country house! The grass is getting green and the flowers are blooming - should be perfect when you come down!!

Love the painting and the close-up to see your special and unique touches to detail. LOVE Howie's photo!!! I just want to scoop him up, hug him and tell him not to worry and that he will probably only get probation. lol