Valentine Confession - I'm In Love With a Cad 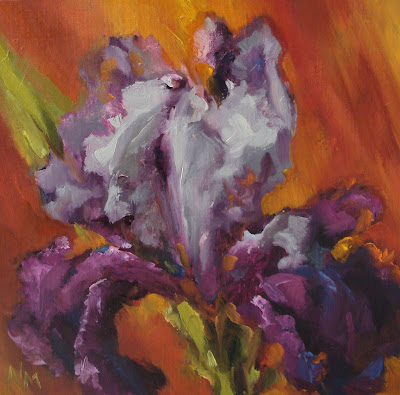 Cupid's Bow, Purple Iris
8X8
Oil on Canvas
SOLD
Cupid's Bow has been finished for a few days, but the sunshine abandoned Texas, so I could not take it out for a good picture for the bloggy until this afternoon. Sometimes it's good to walk away from a painting for a few days - this one had a muddy red brown background originally. I plumped up the color today with some juicy Rembrandt yellow light mixed with Sennelier ochre and just a dab of Charvin magenta. Like Patricia Scarborough's beautiful Red Night, that bright color made a difference.

I have no qualms about mixing different brands of oil paints just so long as everyone gets along with one another and there is no mud slinging. As my sales have slowly increased, my budget for oil paints has gone up.

Over time, I said goodbye to the Winton family and started a partnership in the firm of Winsor & Newton. Later, I got my courage up and bought a Sennelier sample set that is still worth its weight in gold. Later still, I had a torrid affair with a couple of Rembrandt cads who I still stay in touch with from time to time.

It just goes to show you even us mature ladies can be in love with several cads all at the same time. One just has to be discreet with the scheduling is all.
Posted by Unknown at Friday, February 13, 2009

Oh, Nancy you are too...too!!! You're 'confessions' are delightful, and thankyew for the kind mention!!
Of course, your work is lovely as ever. Your flirtations with the cad make me blush!

Oh yes! I'm in love with many brands also! Why not have a little variety....lol... it is the spice of life!
Your painting is gorgeous!!
Happy Valentine's Day!

Nancy, It is so beautiful!
Thank you for sharring.
tweedles

There is nothing like squeezing out fresh paint, from any of these lovely choices!

Thanks for sharing your beautiful art!

The way it behaves for you I can tell it loves you back!
Happy Valentines Day!
Kathleen

You're welcome for the mention, Patty. I hope you are staying warm!!!

Manon, you are so right. Please give Otis-Pants big hugs for me...

Tweedles, you are about the cutest little thing on four feet. Your new blog is awesome.

Jean, I wonder when the wildflowers are going to start making their appearance in your area? I will be heading down there to deliver paintings to the gallery soon! can hardly wait...

Sassydog, thanks for coming by.

Terri, I'm glad I gave you a giggle today. Giggles are also worth their weight in gold. ; )

Kathleen, happy v-day to you too! I hope you had a nice one.

Happy painting everyone!! thanks for dropping by the bloggy...
xxooo

Oh, this is a gorgeous Iris. Looking forward to mine blooming.
Love the comments about paint. They are too luscious.

Nancy - this iris is awesome!!

I love it!
Happpy Valentine's Day!

Peggy, I hope you will post some pictures when yours bloom!

Judy, what a great idea to donate a painting to the Metroport Humane Society. They are such a great group and you are so generous. happy valentine day!

Wow, you really got the ruffle on the edges of the petals down beautifully! Another lovely painting!

Thanks Kim, I've never heard the edge called a ruffle before. That's a perfect description.

Thank you for the v-day wishes R. Garriott, genius mentor for all things Photoshop...!