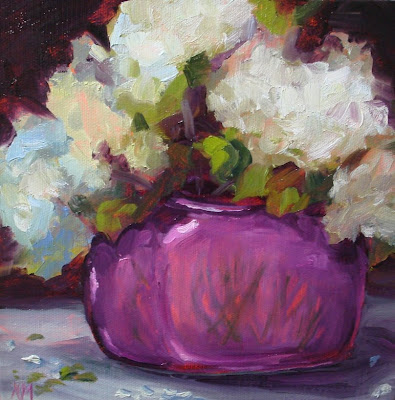 One of my best experiences in college was having Ivana Spalatin as my art instructor. Ivana taught Art History 101, Modern Art and Expressionism, and a number of other related courses at Texas A&M University. She had a passion for art that was genuine and contagious.

Ivana bicycled every day to class from her tiny house on campus, which was filled with the artistic creations of students. In her house, she had painted in script across her lintel the words: "Follow Your Bliss...Joseph Campbell".

In one of her previous university posts, while describing one of the masterworks to her students in class one day, she was brought to tears. For this indiscretion, the board of regents at the school fired her, stating she was "making love to the art."

I will never forget the day I returned to class a week after my father died, sitting down in a desk in Ivana's classroom. My father had committed suicide on February 17, six days after my birthday. When Ivana saw me walk into class, she stopped talking and put down the book she was holding. She walked straight to me, fell to her knees, and threw her arms around me.

This time of year, my mind goes back to Ivana and a time that was so dark. It was also a time when I learned I was surrounded by an amazing amount of love and compassion. What an honor to have been taught by a master like Ivana, who lived the artistic life.
Posted by Unknown at Tuesday, February 03, 2009

Oh my, Nancy, what a sad story. Ivana must have been a beautiful person, and a blessing after your father passed. I'm sorry to hear about your father.

"Follow your bliss", I love that! I think I'll paint that somewhere or on something. Your painting of the white hydrangeas is beautiful.

Nancy, your story made me cry! I'm so sorry you lost your father that way. My cousin also committed suicide at the age of 27. It's very tough to deal with. My heart goes out to you!
Ivana sounds like an incredible lady. The kind of person anyone would be extremely lucky to have.

Your hydrangeas are spectacular!!

That was some powerful post, Nancy. I'm so sorry you had to experience that in your life...but you were so lucky to have someone like Ivana who wrapped her arms around you and showed you the beauty and healing qualities of art.

She sounds very sincere and passionate about her work. It is ridiculous that she was fired for loving art - isn't that the best thing to have in an art teacher?!

So sorry to hear about your father. It must have been so difficult for you! Your paintings show a sensitivity and gentleness that I'm sure reflects your personality. I love the shades of pink in this painting's vase.

Donna, you should check out Joseph Campbell's writings. I think they are pretty inspiring. thank you for your kind words!

Manon, I'm so sorry to hear about your cousin, and at such a young age. Life is just beginning at that age!

Linda, you are so right. I was amazed at all the people in our lives (in the lives of my mom and our family) who stepped forward and showed such compassion. It made a very hard time just a little easier, and that made all the difference.

Thank you Bindu - you have probably noticed I am using a lot of pink, magenta and purple lately! I hope you are getting this beautiful sunshine down there in Austin today. It feels almost like summer in Texas - you are probably biking or hiking or doing something fun...

oh nancy~
your post brought me to tears too. what a strong, loving person you are. you see the love and goodness in everything and i can feel that through you.
your joy for life, art, love and the people and puggies around you just radiates. i am so lucky to know you.
xoxoxo
melissa

Nancy - Indeed and horrible experience, but how strong of you to find something positive from it. Keep the thoughts of the love and compassion. Thanks for sharing.

Love all your flowers!

Nancy, my heart goes out to you for your loss and the dark times which that loss would have created in your existance...what a sad way to loose your father...that is why beautiful people like you are blessed to have people like Ivana around them to lessen the pain and make us remember that this would is not an ugly and sad world...your latest work is once again, a beautiful and serene work full of life and colour!!!

What a wonderful way to honor Ivana. They way she would want you to honor and remember her, in art. She had a wonderful heart and soul to bare your pain in front of everyone Nancy.

Do you know where she is now?

Nancy, I believe you follow your bliss too and I am very fortunate to have you as my friend : )

There are too few teachers with that passion and compassion in the world. What a blessing to have been taught by her during your difficult time.

From forest fires grow the strongest trees and most beautiful wild flowers. I know the anniversary of such a tragedy is always difficult. I admire you for making the choice to focus on the beauty of life. HUGS!

My daughter used hydrangeas in her wedding. I've learned to know them well. You did a nice work on them.